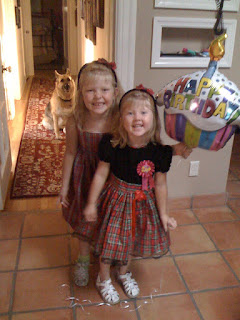 There is nothing better than to have an older sister helping you enjoy your birthday. This year Ashton was a real cheer leader for Jacqueline. She started the day helping to get them both dressed up and was very excited to help show Jacqueline the gift we got her, a Barbie bike. Of course, we didn't realize that she would be afraid of actually driving the bike but luckily her sister was also willing to chauffeur. 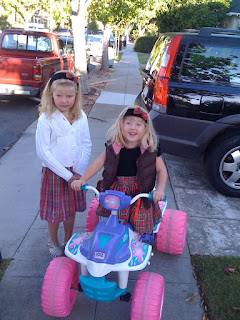 It's true, we are now without any toddlers in the house. While I had been anticipating this day for a long time (and dreaming about if almost every time we traveled or had to deal with a tantrum) I found myself a bit emotional as it happened.

I also realized I could no longer convince her that a kids party was not important as she is now aware of the whole drill being a regular "extra" at several of Ashton's party invitations and even getting a few of her own. 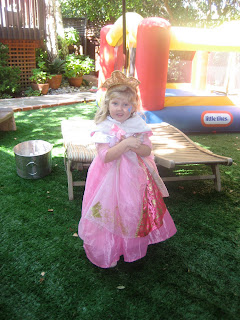 Since she is four, of course this was a Barbie Princess party -- essentially covering all the required bases for coolness. Auntie Suzie came through with a new Princess dress that was one of the several costumes she wore as the event progressed. 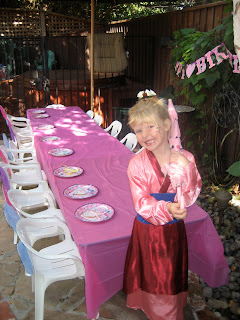 Ashton put on her Mulan outfit and helped to entertain all the kids. 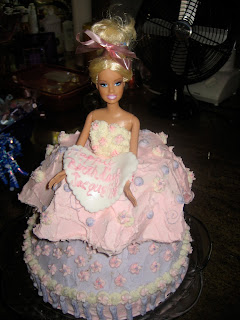 As I began to panic about all the preparation (and cost) of a party, Judy came to the rescue doing all the party work as her gift to Jacqueline. This was a good idea in a normal time, but turned out to be a great idea as I found myself sick on the day of the party itself.

The kids didn't notice with the beautiful party decorations, crafts and Shelly helping with face painting this "low key" party has now set an entirely new bar for the girls. So much for my attempt to reset expectations as to what a birthday party might involve. I guess that idea was pretty silly for me to consider given my personal love of the birthday.
Posted by Meg Bear at 9:28 AM No comments:

We were a bit late getting a camping trip together this year and once we did we couldn't find anyone to go with us. I'm happy to report we went anyway and had a great time. We went to Memorial park which is nice and close and convenient. 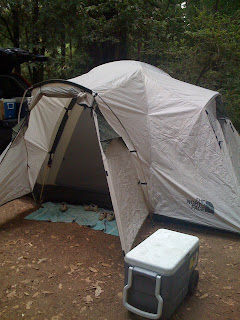 It was a little late in the year, so our late arrival on friday night had us setting up camp in the looming dark. Since this was only the second time we have used our new tent there was some risk in the process, but we managed.

I did take a photo for next time, to orient ourselves with the rainflap, which is somewhat counter-intuitive for me (something I was convinced was overkill -- thank goodness I'm not in charge as it rained that night!).

This trip was a lot better due to the addition of my mother's day gift of my very own cot. I did feel a little guilty being the only one sleeping off the ground but my back was grateful even if the packing was a bit more of a challenge as a result. 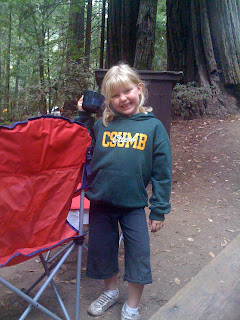 We stayed two nights this time, which makes all the assembly a bit more worthwhile. Judy did all the food prep for us (yes we are spoiled) and Bob did all the gear gathering. I also went a bit wild with the new label maker marking everything easily delegated going forward [grin -- just kidding -- I think].

The big surprise of the trip was how much the racoons were out. The girls and I went to the bathrooms to brush teeth before bed and found ourselves faced with four large ones availing themselves of the water. It scared us a bit, especially when the fourth one did not leave with the other three and we had to go back in to encourage him that people were coming. The girls were mostly frightened and it took a bit of convincing to get them to enter the bathroom after that. 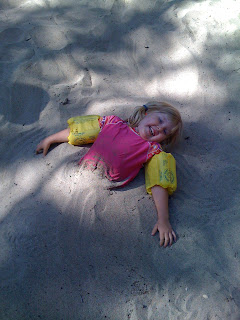 One great thing about Memorial park is that they have a bit of a swimming hole. I think it was at one time an actual pool, but now it's more of a creek. The best thing about this creek is that it can be entered by small kids without parents needing to join. I was especially appreciative of this part.

The only thing I'd change for next year is to hopefully remember to get our reservations in before the start of summer so we can go more than once. The whole family really enjoys the camping experience.
Posted by Meg Bear at 9:34 AM No comments:

Too much force is with me 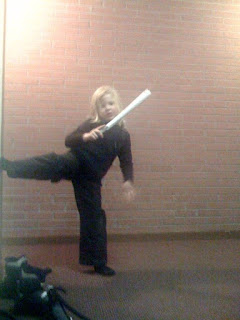 I don't know how it happened but some how my life has been invaded by Star Wars (and yes I blame Bob!). First it was the cartoon series, that introduced such complex discussions as "killing droids" and "what color is your light saber" and shouts of "I'm Ahsoka", "I'm Padme".

This quickly graduated to claims that the kids demanded to watch the movies and long discussions about which planet so and so came from etc. etc. For the majority of the discussions, I'm on record about being against this as age appropriate for a 3 year old and yet I seem to have no say in the matter.

We have now graduated to watching history channel programs on the science of star wars and now the girls have even asked Bob to start reading them the Star Wars books at night. We're taking turns where on mom's night we are reading the Little House series and on dads it's Star Wars. When they ask me to read Star Wars I stick to a similar story I used for painting nails... mom doesn't know how. My extended story is that since I don't know the proper names of all the places etc. I am ill equipped to read the books to them (which I might add are NOT children's books but young adult novels)

Today I hit a new low in the Star Wars fad when my youngest upon waking up came out and said "Mom, maybe I can teach you how to read the Star Wars books". Yes, this is now my life, a 3YO trying to teach me how to read a young adult novel. Where was that in the fine print of parenting? I'm seriously considering breaking out High School Musical or Hannah Montanna to fight back, but I know that will backfire!
Posted by Meg Bear at 3:45 PM No comments: