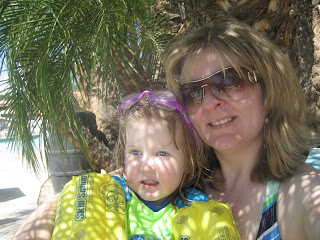 Right after Easter we all packed up for a fun in the sun visit to Phoenix to spend some time with the Ochse/Driscoll families as well as celebrate Stu's birthday with a surprise party. 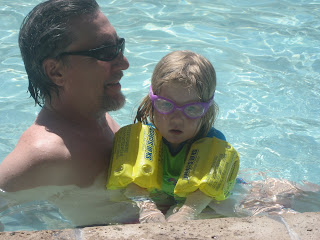 Both girls had a great time in the pool but sadly Jacqueline was pretty sick this whole trip.  In fact, one could question her parents for dragging her on a plane with a high fever and a case of bronchitis (in my defense she did see the dr. the night before and was cleared to travel but she also did throw up 4 times before we left for the airport and spiked a fever of 103.  Thank goodness for Tylenol and Motrin!) 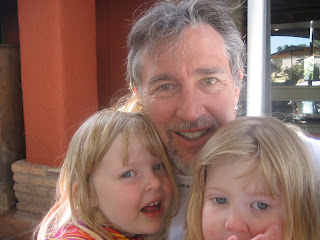 Daddy and the girls eating after the lazy river run. 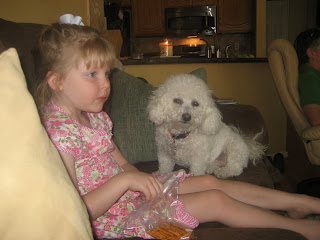 Ashton was fast friends with Stu and Diane's dogs.  Although I think the big attraction was the pretzel chips. 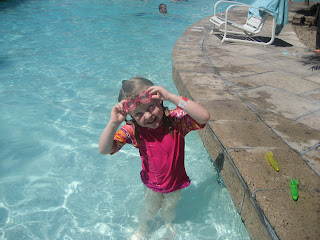 Ashton, on the other hand managed to stay well the whole time and really enjoyed playing in the pool.
Posted by Meg Bear at 9:57 AM No comments: 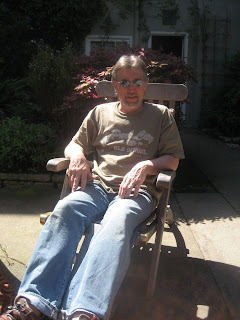 Easter was an excellent spring day.  Of course not all family members were well (Jaq) so it was also a bit slow for us.  Although Jacqueline was struggling with a bit of a cold, she did manage to start her day out with jelly beans so she was happy.  Dad enjoyed some time in the sun. 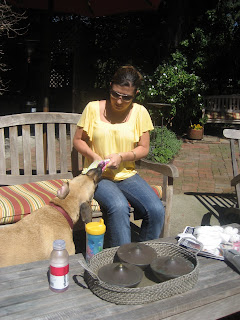 The highlight of Easter was the visit from Natasha (the only family member that came through for the celebration).  While she wasn't able to stay for dinner, she did manage to play some with Buddy and do some time in the bounce house with Ashton. 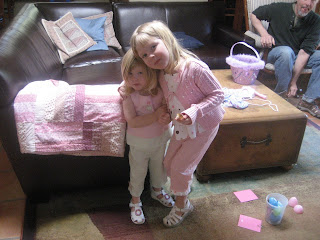 Special thanks to Judy who not only came through with dinner even though she was sick but also got the girls these adorable easter outfits, complete with purses. 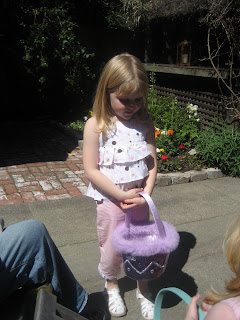 Ashton was very adept at the easter egg hunt this year. 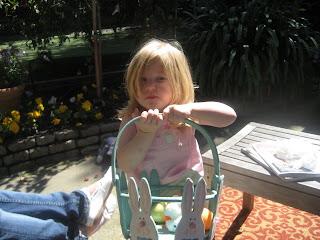 Jacqueline also did pretty well, especially since she wasn't really felling 100% at the time.
Posted by Meg Bear at 9:57 AM No comments: 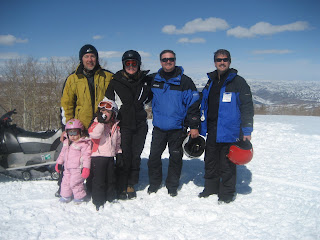 As you can see the highlight of this ski trip is the snowmobile day.  Vic (and Co.), Chris (and Co.) + the Bear clan all took to the snow.  The day was beautiful, the girls loved it and only a few in our party tipped over (not me of course, I had the convenient excuse of the girls for going the slowest). 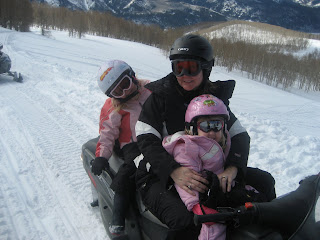 This was just a pose, we did not all three ride together.  Bob took both girls once but I was not confident enough for that! 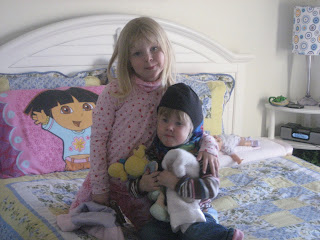 This is Jacqueline showing off her new turtle fur hat. 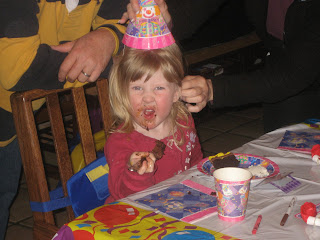 We celebrated Bob's birthday while we were in Park City.  Papa Terry managed to get decorations and a cake which was a big hit with everyone.  Interestingly we didn't manage to get any photos with Papa Terry in them ?!  But he did enjoy a couple days snowboarding and got quite a reputation of someone who could easily be convinced to go for a Hot Chocolate run. 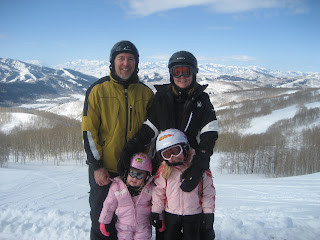 And finally a family photo.  You will notice that we all own helmets now which was the highlight of the season.
Posted by Meg Bear at 11:30 AM No comments: 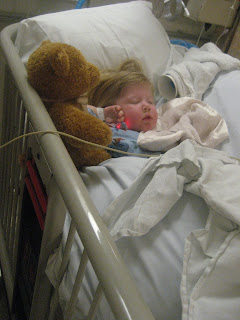 We are finally home from the operation ordeal and I thought I had better get a blog entry out there to update everyone. First and foremost the operation was a success. The doctor said that her tonsils were not only enlarged but chronically inflamed and that the operation "couldn't have gone better". Adenoids and ear tubes were also done just to keep it real. 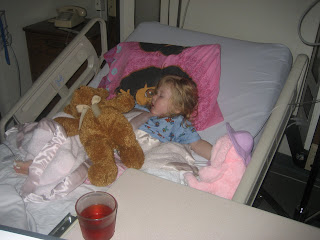 They moved the operation to 7:30am (from 8:30) so it was an early morning.  Adding to that, for some reason even though we got the girls to bed late on thursday night Jacqueline was in our room at 5am friday morning ready to go. Add to this I decided to get sick on wednesday night so I was up since 3am with fever which made for a bit of a rough morning. The operation went according to plan and we were in recovery with her around 9am. 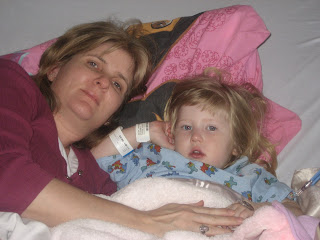 She was pretty sleepy most of the morning and we were hopeful things were progressing along well but then she got a bit behind on her pain medicine.

Sadly, she then decided to get sick every time we attempted to give her any pain meds which left us with only tylenol for her. Needless to say it was a rough evening/night. Later in the evening she decided to progress with a bit of an infection so fever and runny nose/cough were added to her fun.
Since this was my only non-birth hospital stay I realized that the back pain I had associated with epidural really was just an uncomfortable hospital bed. We kept her on the IV throughout her stay which was good as she was refusing to drink on her own and getting more challenging as the day wore on. 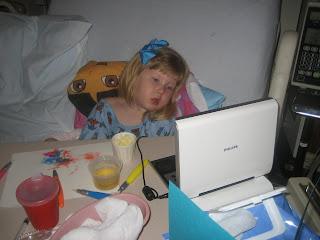 This morning, we learned that the surgery center closes at 2pm so we were going to have to either move her to the hospital or take her home and find a way to get her to drink.  We decided we'd risk taking her home and got the doctor to agree to let us give her some motrin in addition to tylenol for her pain.  Well as I'm sure you guessed that worked like a charm.  We got home and gave her motrin which she took without much protest and suddenly she was on the road to recovery. 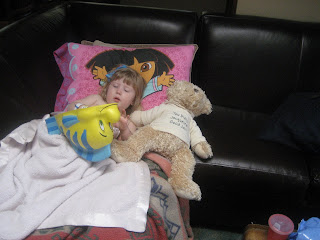 A few tv shows and some chocolate pudding later she was ready to play some games with dad while mom took a nap.  Now she is laying down, in theory taking a nap but she has willing taken a bottle and even managed a smile.  So I'd say we are on our way.  I'm planning to start her on the antibiotics this evening to clear up the infection.  We are told to expect a bit of a rough week but now that she is drinking we are out of the woods for any serious worries. 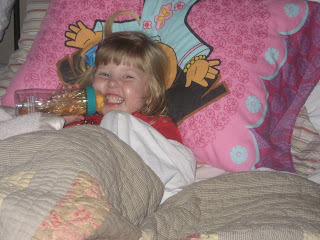 Ashton is happily enjoying a sleep-over with her cousins so hopefully we'll all catch up on our rest before she comes home tomorrow and be ready to start another week.  I'm on day 3 of the antibiotics myself so I'm also hoping to be feeling better by tomorrow.
Thanks to all for the well wishes, cards, flowers and cuddly bears.  I will write a different post about our Disney Princess on Ice adventure as I promised Ashton I'd include some photos and this post was getting too long.
Posted by Meg Bear at 5:31 PM No comments: