Of course, this year's Halloween had to be a Star Wars focused one. Even Daddy was drawn into the mix as Obi Wan with Ashton as Queen Amidala and Jacqueline as Ahsoka 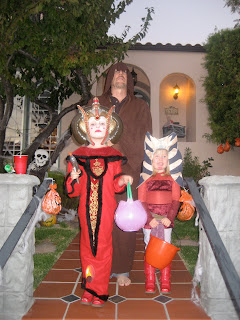 Having no interest in joining in the Star Wars theme I went my own way getting a Poodle skirt and accessories. You might see me in this outfit again as it was comfortable and easy to wear. I was hoping to skip an outfit all together but Ashton was having none of that and I've learned in the last few years that while masks sound like a great idea they actually make it hard to keep an eye on the kids. 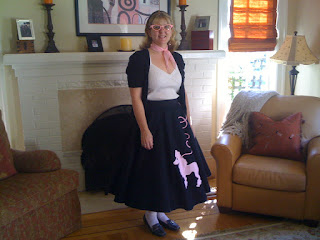 Grandpa Bob joined again to help with the chaos that is the Burlingame candy rush. His costume got a lot of positive comments as well with his "H1N1 specialist" name tag and the gloves came in handy for the slew of kids we came in contact with. 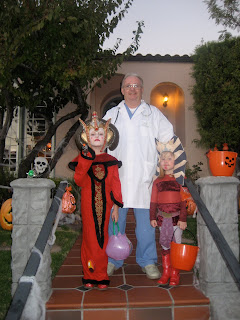 Not only did we give out candy but we also had adult drinks to share with the neighbors as well. In addition this year each of the girls had an opportunity to go trick-or-treating with some neighborhood friends. This was an added bonus for all involved. 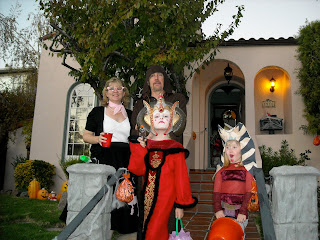 Halloween continues to be one of my favorite holidays in Burlingame.
Posted by Meg Bear at 1:21 PM No comments: 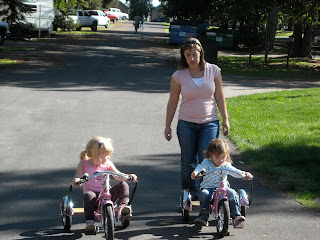 Well calling this "camping" might be a bit of a stretch. Kathi and crew were in RVs and we were in rented Cabins. We were, however, really enjoying ourselves with lots of family to visit with an tons of kids to play with. Add to that a camp environment setup for kids and you have a recipe for a great weekend. Bonus points for it being so easy being between Dad's and Suzie's house in Petaluma. 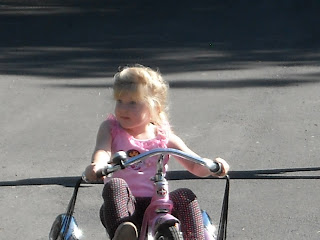 It was especially great that Grandpa Bob and Auntie Linn joined us a "day trippers".


The highlight of the trip for the girls was the power cars that Kathi brought. 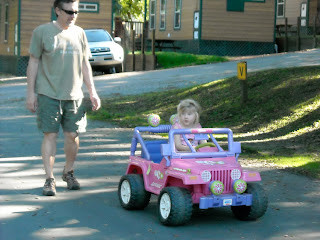 Both girls took several trips around the park and even managed to pick up a few strangers along the way (?!) with a random kid deciding it was her turn to jump on. 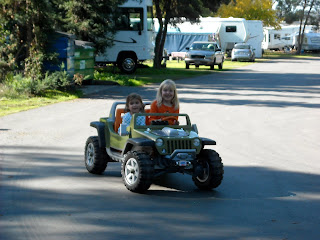 We only had to suggest a few times that riding on the top of the car and not holding on was a bad idea.

*photo credits all to Grandpa Bob since it seems I didn't take any photos this trip as my iphone was in use making music to accompany the beer consumption.
Posted by Meg Bear at 9:43 AM No comments:

Yup, I guess it was inevitable but the Bear household got the flu. To be more accurate, Ashton did. The rest of us went on Tamiflu and had mostly mild symptoms but as often happens they seem to last longer in adults. For me they included a sore throat and a lot of fatigue.

At the peak she spiked a fever of 103 but seemed to bounce pretty quickly after that. The hardest part was keeping her out of school since she does not like to miss that at ALL. Here is the trip to urgent care where she was not at all thrilled with the flu test. 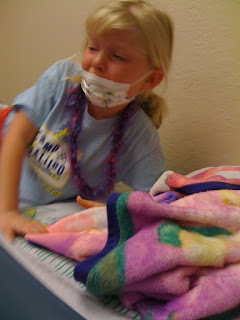 As Murphy's law would dictate we had a big storm while I was away at the OOW conference and Bob found himself without a side fence.

This would be a bummer under any circumstance, but for those who are about to do a large-scale construction project next year it seems even more cosmically obnoxious to us. 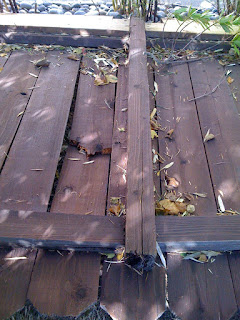 Luckily, Bob realized that we had just the right person to call to help repair the fence to hold it together for one more year without requiring a whole new fence to be built. 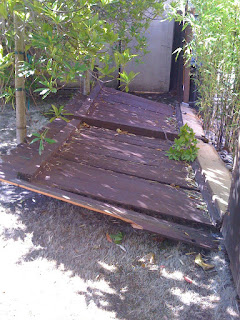 You guessed it, this was just the job for "Grandpa Bob the Builder". He came the next weekend with tools and supplies and helped us put in temporary supports to hold the fence together. Just the thing! Thanks Grandpa Bob, we are so grateful. 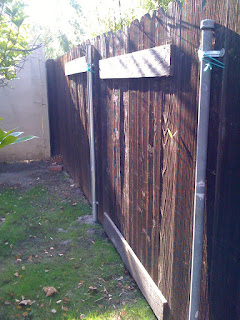