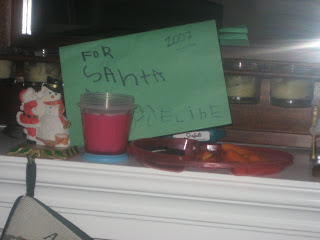 As I'm sure you guessed Christmas '07 was a very fortunate event for the Bear girls.  As you can see they left Santa a nice note with milk and cookies and carrots for the reindeer.  In fact Ashton's name is also on the note but the photographer didn't position the card correctly to show that. 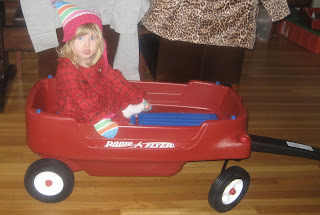 The wagon (and the hat and gloves) have already gotten some good mileage in the weeks after Christmas.   The wagon was from Grandma and Papa Terry.  The hat, gloves (and matching sweaters) were from the Chicago cousins.  The big Santa gifts were a "my first dollhouse" for Jacqueline and a "Baby Alive" for Ashton.   Bob did attempt to negotiate that Ashton could change her sisters diapers if she wanted a baby to wet itself but somehow that didn't stick so now we have yet another butt to change in this house. 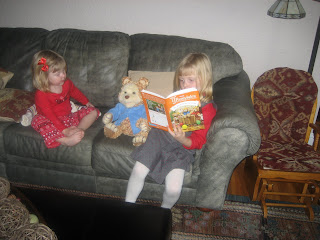 While the Tj Berrytales was Jacqueline's gift I think it is Ashton who appreciates the stories more.  Jacqueline keeps pushing the button to play the music much to the irritation of her sister who was mid-story.  This was Jacqueline's gift from Grandpa Bob but it's ok that Ashton likes it too since Jacqueline is over the moon about Ashton's Black and Decker workbench and power tools.  Lots of things are regularly being built and fixed in this house now.
Christmas dinner was also great -- thanks to Judy of course -- we had an excellent ham dinner and wonderful dessert of Yule log.  We also managed to get a nice neighborhood walk in with the wagon since the weather was gorgeous.  We are truly blessed.
Posted by Meg Bear at 3:22 PM No comments: 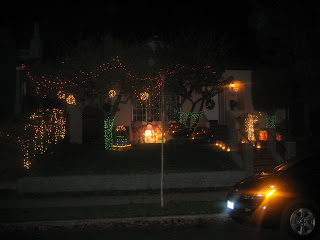 So by now you've realized that I've moved to an online version of a Christmas letter. The first reason is, of course, that its easier to do, no more stuffing envelopes and extra lead-time for the holiday cards to get color copies. Those of you who noted the lack of a letter last year might have realized that two small kids just took the wind out of my sails for pulling a letter together.

The second reason, is to make more people aware of this blog and let you find out as much (or as little) about the year in review as you want. To that end, I am going to focus this letter on the christmas season and let you read prior entries to catch up on things like easter, halloween, etc (if you haven't been bored to tears of course) 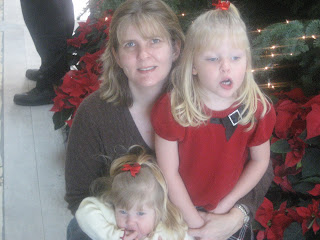 Chrismas season is, of course really just kicking off but its the nature of the Christmas card that requires you to pre-report your plans. Our plans this year are delightfully low key. We are going to be home for both Christmas and New year this year. We've moved our ski trip to the second week in January to extend the vacation season for ourselves and I'm guessing this might prove the new tradition for us. Not rushing out after the holiday sounds pretty plesant to me right now, we'll see if I'm right to feel so optimistic about it with the ski report entry. I am a little concerned about what we are going to do with Jacqueline for the ski trip though, she isn't going to be excited about the idea of everyone going skiing and she is not. I'm still trying to figure out the story there. Ski school requires you to be 3 and a half and potty trained so there is no way she can go this year.

As you have noticed from the photo we managed to decorate outside and in already. Since we are only in the second week of December I'm personally impressed with this accomplishment. All credit goes to Bob as this year he did the whole thing himself with my only participation being keeping an eye on Jacqueline to make sure she didn't jump off the wall and/or run into the street. Trust me that was a full time job. 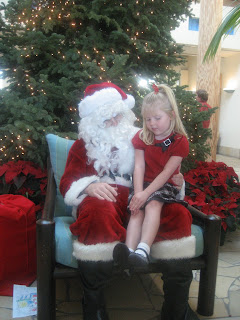 Last weekend we also did our Breakfast with Santa at the gym. While this was not a relaxing breakfast for us (we can always hope for next year on that front) it was cute to see Ashton tell Santa that she wanted a doll and her sister wants something Dora. Jacqueline made it very clear she didn't want Santa to come anywhere near her so Ashton took it upon herself to make sure her desires were covered as well. Very sweet! 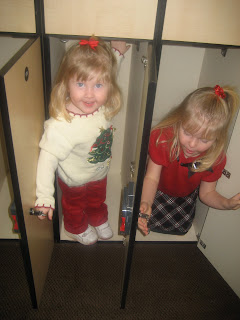 Of course they also had to play in the lockers, I did toy with the idea that they would be fine in there by themselves but decided that maybe someone would frown on that idea. After breakfast the girls went to the children's center so mom and dad could get a work out and recover from the festivities. Made for a very nice day for all involved.

Turns out that this holiday has Ashton with the biggest social calendar. Not only is there the school party but also she is going to see two different shows without any of us. She is going to see the Sippy Cup Band with Judy and Julianna and to the Nutcracker with [neighbor] Dan. This year she is still going to pre-school M-W-F and has just taken up a gymnastics class on thursdays to keep her busy. While she is not reading, Ashton is very interested in words and has begun to focus on sounding them out. She is also surprising both Bob and I with how she is transitioning out of any glimmer of a baby. It's still hard for Bob and I to get used to the idea that she doesn't miss anything that goes on around her. It certainly makes planning Christmas more complex as I need to have places to hide things in our small house. 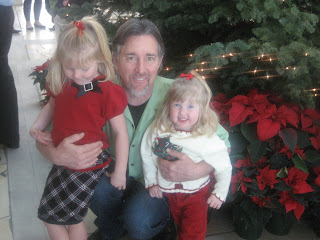 Jacqueline, of course is fully into her twos and has been anxious to have her opinions heard (!). Her current response to not getting her way is a combination of tattling on whomever is not doing her bidding (daddy wouldn't let me play with water) and running away yelling. I guess its a slight step up from throwing herself on the floor and banging her fists but only a very slight one. So far the rest of the family finds great humor in this show which is probably not the desired response. Jacqueline not in pre-school this year, instead she goes to a music class on wednesday and we are testing her out with a gymnastics class also. Last week was the first week so we are still not 100% confident it will "take". She likes the climbing and tumbling part but not so much following allong with the rest of the class part. Still too early to tell if she is going to catch on to the point or if we are just wasting our money with the idea.

Bob and I are both happy and blessed to have had such a wonderful year with our girls. We have enjoyed every minute of their baby years (even the bad ones) and are looking forward to see what 2008 will bring. We wish you all a wonderful holiday season and look forward to catching up with each of you when we can. Feel free to leave a comment on the blog and let us know how your holiday was, we'd love to hear!