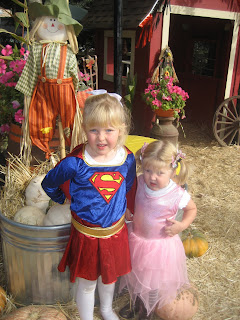 Today we finally got a chance to go to Lemos Farm in Half Moon Bay.  I have had an intention to go there for years now but the travel time always makes it seem like a bad time. 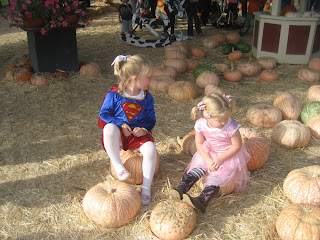 Today we were invited to a birthday party so that gave us a reason to follow through.  The place is all that and then some as far as pumpkin experiences.  There is hay, pumpkins, people in festive attire. 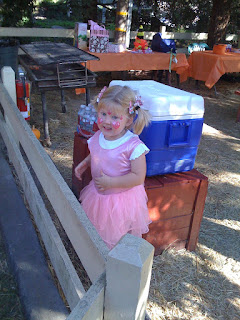 There was face painting and a nice picnic area for the birthday party.  All of that made it seem like it might have been worth the hour and a half in the car going 8 mph (tops) to get over the 92 into Half Moon Bay.  Of course the weather was perfect which probably added to the traffic. 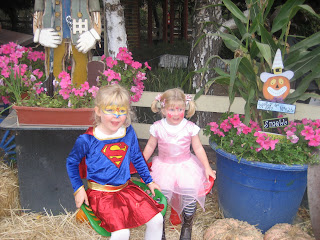 Those who have been paying attention will remember that Jacqueline was going to be Tinkerbell for halloween.  When I mentioned that we already have a Tink outfit she got herself an Ariel costume.  Of course that one is too big on her so we were not too upset when she wanted to wear a random outfit in their dress up cache to be a "princess".  So this is Jacqueline's third outfit, I'm still not sure what will be used on the actual halloween day, I guess you'll find out then (although I must say that history shows me to be very poor at taking photos on the actual day of trick-or-treating.  Something always seems to come up when I should be snapping photos (like a dead battery). 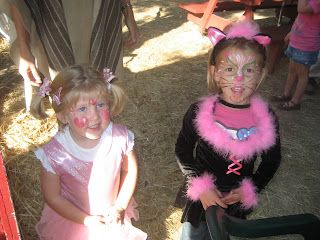 And special thanks to Courtney for having such an excellent birthday.  We did the train (twice for Jacqueline), a short time in the bounce house and even the pony rides for Ashton.  The trip home took 20 minutes so we had time to take a bath and get all that face paint off before school tomorrow.  Excellent weekend.
Posted by Meg Bear at 7:00 PM No comments: 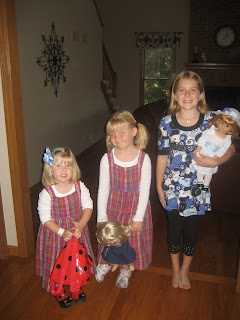 Off to our American Girl Store adventure.  Each of the girls are armed with dolls and bags to carry them.  The California Bears also have American Girl dresses thanks to Grandma and Papa Terry. 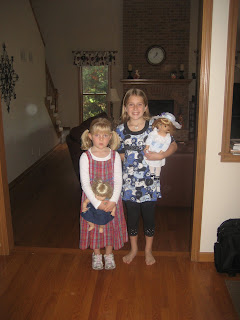 Ashton was quick to notice that Melissa's doll was "Nellie" who was a major character in the Samantha books we have been reading (her mother seemed to have completely forgotten that fact... gasp!) 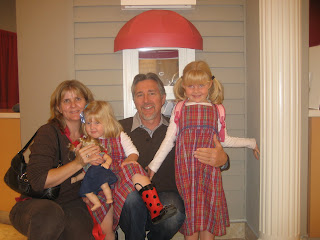 Bob was a huge sport going with all the girls to the store.  Of course he was captivated by all the pomp and circumstance.  You will notice the fact that the dolls had their own seats at the table.  Ashton was over the moon about the experience while Jacqueline was very interested in the workings of the doll seat. 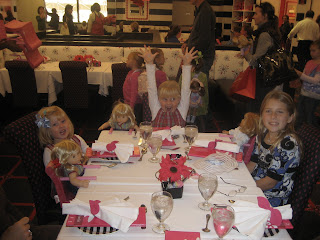 In addition Jacqueline was (of course) enthusiastic about the hot chocolate and the fact that her doll got a cut and saucer as well. 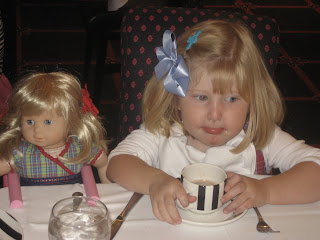 Melissa was also color coordinated with her doll.  We all enjoyed the tea sandwiches and scones as well as the dessert. 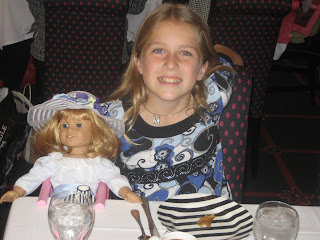 Ashton took to wearing the hair bows right away, which luckily matched her outfit. 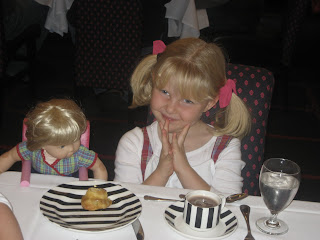 Next was on to exploring all the amazing things you can buy for your dolls (can you say marketing genius?!).  The girls were so excited they had to strike a pose for us near the books.  In the end Ashton got Licorice the cat, Jacqueline got Coconut the dog and new purses to carry their dolls in for next time, and yes they are already planning for next time I can assure you. 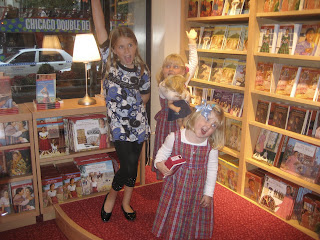 We all had such a great time going to see the cousins this year.  I had a conference in Chicago so the girls and Bob spent the better part of the week imposing on Steve and Helene and the girls, then I finally got to join for the weekend. 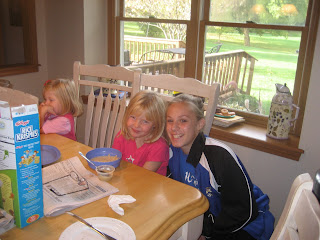 Maria blew us away with the fact that she is driving (permit) and has turned into a gorgeous and sweet young lady.   She took a lot of time out of her busy weekend to spend time with the girls and make them feel appreciated.  She even "friended" her aunt on Facebook which was sweet. 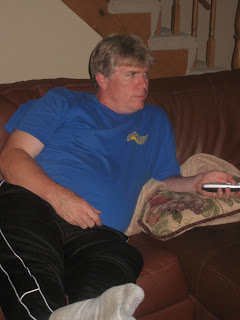 Steve was so helpful making sure we had such a relaxing trip.  Picking us up at the airport, taking Ashton to the store and becoming a favorite for Jacqueline to tease. 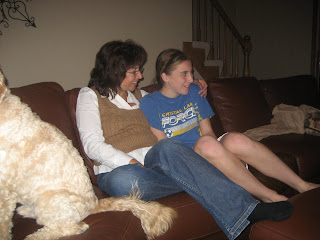 Kelsey surprised us by being SOOO tall.  At 5'9" she is on the volleyball team and helped them win first place in the tournament this weekend.  Sadly, I didn't get to see her play since Volleyball is the one sport that I actually understand and enjoy.  Hopefully she'll keep it up so I can watch next year. 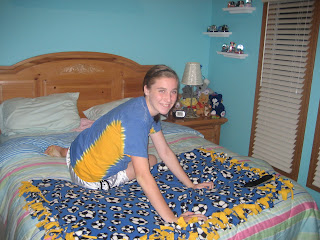 You will notice that we managed to defeat Alex staying up too late visiting with Bill and Annette (who were kind enough to come over to see us). 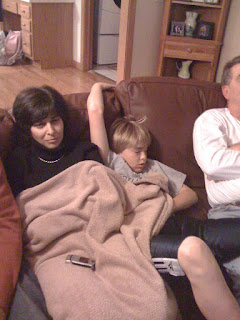 Melissa was such a great friend for the weekend.  She was so very patient with the girls, even the cranky Jacqueline. 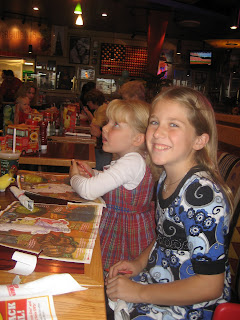 Jacqueline kept us all busy, from making a fuss on the plane ride out not wanting to put her seat belt on to not wanting to get to sleep at night, here she is getting help from Dad while waiting for lunch to arrive. 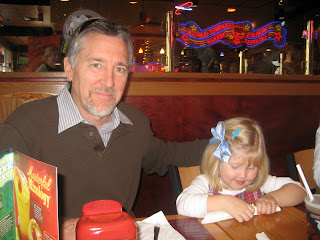 Of course she also solicited help from Aunt Helene with her adventures.  Everyone was very patient with her although she did earn the nickname of "pistol" which she rejected. 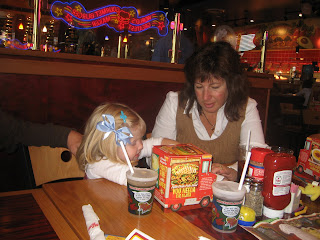 As we were packing up to leave last night Ashton was very angry with me wanting to know why I had only planned them to stay such a short time.  They were just beginning to have fun!  I guess that we can safely say that they are looking forward to going back next year.
Posted by Meg Bear at 6:47 PM No comments:

So this weekend was the first annual Groth family Harvest ride sponsored by the Ukiah Groth's (specifically cousin Kathi).   So, while Kathi gets 100% of the credit for the idea and execution of this event for our family.  Ashton Bear was my own personal star of the show.  At 5.5 years old she managed to stick with the ride for a full 20 miles. 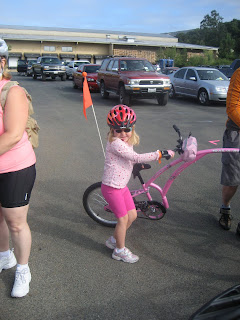 If you bothered to click through to the details of the Harvest ride, you will notice that there really wasn't a 20 mile option.  We decided to not let that take away from our accomplishment.  Since at the 10 mile point we all decided that it was appropriate to turn around and head back. 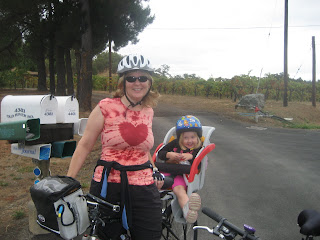 "Team Jacqueline"  also made the 20 miles event with Jacqueline doing her part by carbo loading while Mom did the peddling.  She also did a lot of singing and even a little back massaging as the ride went on which was helpful.  There was however, a bit of a disagreement about how much of my seat I was allowed to use.  I mistakenly thought "all of it" and she had other ideas (note her outstretched legs). 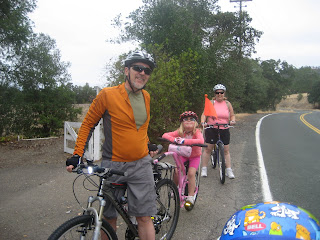 "Team Ashton" included Bob and Ashton who, for the most part, made it look pretty easy.  Ashton did suffer a couple injuries (a result of not having gears on her part of the bike and losing control of the peddles which essentially came around to whack her in the shins) but she hung in there with a promise of a band-aid at the end.
Suzie also made it the 20 miles, keeping an eye on the rest of us for the event, a great job for her first ever bike "race".
Kathi and Sandy made it the full 26 miles and Uncle Ken went some 66 miles up a lot of hills (?!).  Or so we are told, we didn't get anywhere near his route.  Ours was thankfully quite flat with only one hill to speak of. 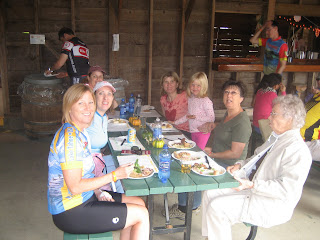 After the race we were met by Auntie Linn and her mom for the BBQ.  Everyone was appropriately tired, hungry and happy with our accomplishments. 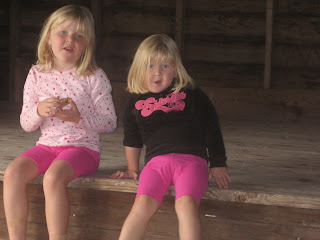 The girls made quick work of checking out the stage to show off their cool bike shorts.  One might wonder why the 3 year old in the bike seat would need padded shorts.  And to that I respond that one might not be the parent of two children, for if you were, that would make perfect sense. 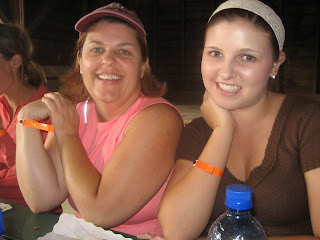 Jordyn used some kind of foot surgery as an excuse for not making the ride itself, preferring instead to look good for photos after the event.  To that I say "next year girl".  She did manage to help with the girls while she hobbled around, since they were still pretty full of life at the BBQ when the rest of us were intent on relaxing. 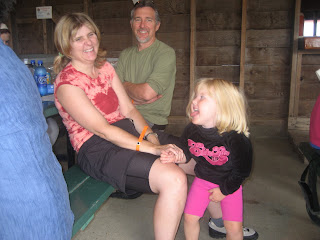 As you can see Jacqueline was managing to crack us up.  A sign of a successful (if tiring) trip.
Thanks to Kathi for hosting our large crew at her home, having a great dinner party the night before to get us in the mood and making the trip to Starbucks in the morning to help us wake up.   A weekend with exercise and family, I can't think of anything better.
Posted by Meg Bear at 6:03 PM No comments: