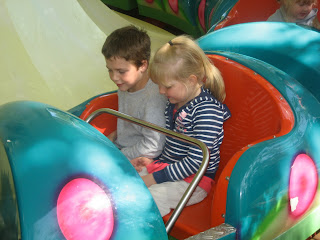 The Bear's and the Carnecchia's took a day trip to the Gilroy gardens as a spur of the moment idea. It was mostly based upon the fact that the weather was expected to be a bit cooler and I had heard great things about the park for kids.

Dante (7), Ashton (6) and Jacqueline (4) were all about the perfect ages for this park as I expect after age 10 things start to get a bit boring. As it was Jacqueline had to talk Dante up a bit when they decided to sit out a roller coaster with me instead of going with the adults. 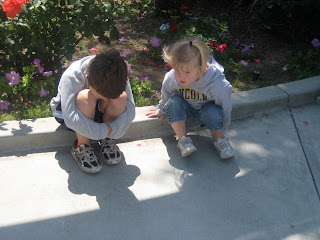 Jacqueline was really having a blast with the rides as there were a lot for her age. As you know, she especially likes the car ones (or in this case the fire truck). She made us wait a few times for this one. 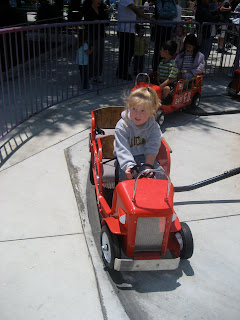 Dante and Ashton enjoy being the big kids and attempted to ditch Jacqueline a few times but overall were pretty patient letting her join them. All in all a great day. 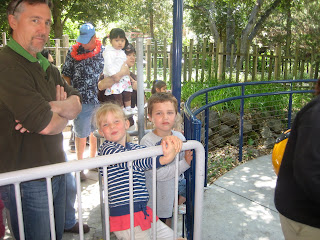 Jacqueline was on a roll today. She had a playdate with our neighbor friend Sophie and then when that ended she asked me to read her a story. The book was a free Taco Bell (yup only the finest dining in the Bear family) one that mentioned a free song download. I got curious about the song since it was not an obvious tune (and I was expected to "sing along" with the book). I went to the den to download the song, which was a bit of an ompa number about a dancing bear.

Of course, she had to go get her own bear and make it dance.
Then, she had to put on her sparkle outfit to match the bear. After about two rounds of the song I remembered to video it for your very own enjoyment.

You will notice that she is dancing around her pants that she left of the floor in her rush to dress appropriately for the music. You have no idea how serious this kind of stuff is at 3. It's VERY important to dress the part.


Later the afternoon we were doing a family jacuzzi (we put some cold water in for the girls) and for some reason I told Jacqueline that she "blew me away". Her immediate response was to start blowing on me which took me a minute to figure out what she was doing.

And one final story.

As I was attempting to clean up the mess from the day I put on Dora. Those of you familiar with Dora know that it's a bit interactive. They were doing a part that required naming shapes. She got the circle right, called the triangle a diamond, got the square right, called the rectangle a line (which was actually fair) and then got the pentagon right (one I had to take a second to be sure about). I found that a perfect example of Jacqueline's intellect. Not to be underestimated at any level. Just when she makes you think she doesn't know any of her shapes, she comes out with pentagon.
Posted by Meg Bear at 3:54 PM No comments: 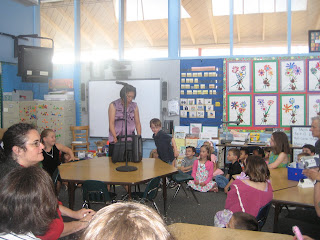 Today was the first Open House I have attended as a parent. What a great time. The kids each published their own poems and read them into a microphone for all to hear. It was outstanding.

Jacqueline was on her best behavior too (this could not be said of all the siblings). She was quiet and clapped for each of the presenters on cue. I was very proud. 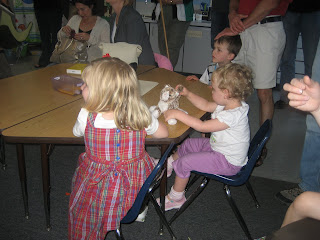 After the reading we went around the classroom and saw all the excellent projects, games and artwork that they have been doing. It was quite impressive. Then we saw the library and visited a few of the first grade classes to get a glimpse of next year.


I was also able to get a video of Ashton achieving one of her big goals this year -- getting across the monkey bars. I was so proud of her.


Great job Ashton! Your mom is very very proud of you.
Posted by Meg Bear at 8:28 PM No comments: