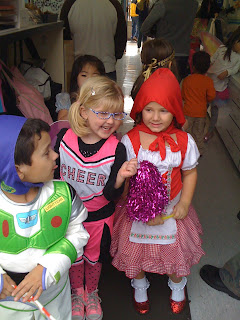 This year mom found herself on a plane returning home the day of the Halloween parade. I missed the parties but managed to get to the parade and snap a few photos. Bob got to the assembly but due to over-crowding we didn't really get any photos that were recognizable as our children. 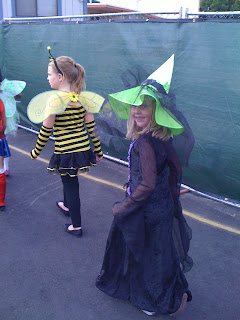 Ashton was a very colorful witch. A seasoned expert at the parade I didn't really get to see much of her. The parade was almost foiled by rain and the construction of the new school building has shortened the playground so the route wove through the classrooms instead. 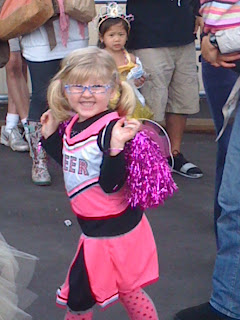 The glasses are completely decorative. The girls were so anxious for glasses that we bought some readers at Target and popped out the lenses for them to play with. They were a good addition to the cheerleader getup. 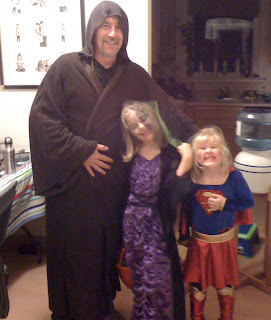 For the actual Halloween you will notice we had one family member do a super costume change. In fact, she had done three different ones but one fell apart completely. First she changed her mind to be a witch like her sister.

Then she put on a poodle skirt to match me

and last, back to supergirl which managed to stay through the trick-or-treat event. 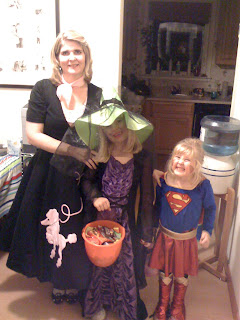 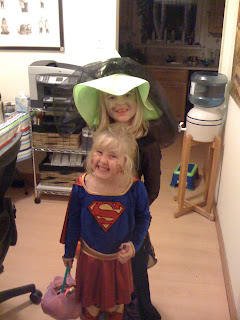 There was a block party on our rental neighborhood with lots of cute kids dressed up and playing in the street. What a great time. While we missed having Grandpa Bob join us in the rental, Bob and the girls did trick-or-treating in both neighborhoods so a lot of candy was procured.

Traffic at the rental was much lighter than I'm used to so manning the door was not as fun as I had hoped. We are all looking forward to returning to our house for next Halloween. 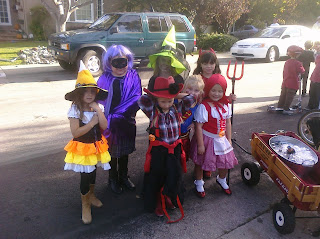