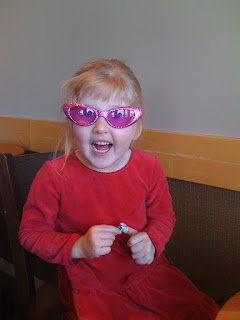 While Jacqueline tends to have very few demands in general (except to want everything her sister has) she did want to do a ballet class. We did a repeat of the class Ashton took at the gym but it was a bit of a bust to be frank. Mostly, there were not enough kids to give it structure so after six weeks we went looking for something new.

We found an indoor soccer class which sounded perfect. She had expressed interest and Ashton was certain she didn't have any -- what luck, something special just for Jacqueline. Independence here we come.

and then... of course.... it was canceled due to lack of enrollment. In a quick scramble to re-direct all the positive energy we had built up for soccer with her we landed on Junior gym and everyone involved is thrilled! 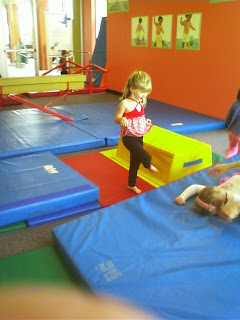 Jacqueline loves it and seems to have that right balance of fearlessness and willingness to try anything that is worked out well. I'm hopeful I get to go see a class before it ends but thankfully Judy sent back a photo and it does look like fun.
Posted by Meg Bear at 12:26 PM