Where is our firetruck anyway? 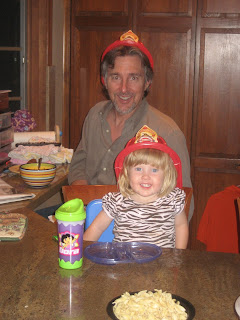 Its been a big few weeks. Getting home, getting the house back together, getting another trip to Urgent Care for Ashton's ear infection, celebrating my birth week and having end of year school stuff has seemed to limited the photo ops.

I think [hope] we are back on track now. The ear infection came as a result of the school pool party that thankfully Bob took her to (last year I got a sunburn and a clear sense that I was walking around in water that was going to give me a rash from the knees down). We caught it early and as a result didn't suffer any real "down time" as a result. Even urgent care was very accomodating cutting our typical 2 hour wait down to 20 minutes.

It was the urgent care visit that took us to San Mateo which was having a street fair and thus giving out these cute firehats. So where is that firetruck anyway? Turns out it is lost in the abyss that is our attic. Good news is that we have no room for it downstairs anyway and as the firehats have already torn it seems we haven't really missed anything anyway.

This weekend had Bob and I off to Napa with Bob's work -- Ashton and Jacqueline had a sleep over at Dan & Jani's with excellent success. Ashton produced her own cooking show with Dan (hope to get the video shortly) and asked the sage question "Why would you have a pool party with a girl who has an ear infection?" when Dan suggested that they could play in the baby pool in the yard. Jacqueline managed to lose her blanket (which was later found at a great cost) and both seemed reasonably happy to see us get home. 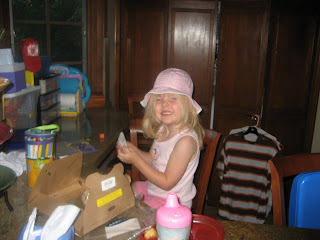 Yesterday we did a nice (short) bike trip with the only downside looking to be Jacqueline rubbing off the sunscreen around her eyes. This resulted not only in her eyes hurting yesterday but the appearance of a sunburn under both eyes today. 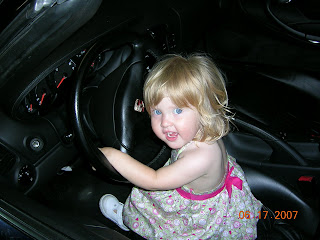 Today is Ashton's last day of school so we will be starting summer camps and other summer events for August as well as getting back to the swim lessons we keep missing on Saturdays.
Posted by Meg Bear at 8:27 AM