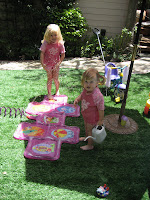 Finally, had a slow weekend. Girls were happy to get soaked in the back yard on the Dora hop scotch sprinkler mat (yes that is our most excellent fake grass).

I've finally figured out that the character is called "Dora" correctly by Jacqueline, but the show is "Do-Do-Dora" which isn't really too far off of the theme song in her defense.

On other song updates, I'm still struck by how cute the ABC song has become in our house. She gets the whole thing right until the end where it goes "QRS... Y.. and Z.. Now I know.." and so on (essentially in Jacquline's world "TUV, WX" are missing from the alphabet song).

The other big event for the weekend was the arrival of our new sofa in the living room. Its actually a pretty cheap one from Costco, but it fits nicely in our tiny family room and with some pottery barn pillows we think it will do. Of course within hours of the arrival it had things hidden under the seats and had cheerios crushed on top.

We also got a cool zen trellis to go on our new deck area but we're still waiting for the patio chairs before I'm going to post a photo of that. In the meantime our old family room couch is on the deck waiting for the nice people from St. Vincent de Paul to come and pick it up next week (a comfortable if not exactly appropriate place holder).

All in all a nice and relaxing weekend (finally).
Posted by Meg Bear at 6:11 PM